Herman and I are in Ulan Bataar, Mongolia. How we got here is material to fill a book, but I will try to tell it to you in short.

the first day we left the hotel in Bejing to get to the Chinese Wall where a beautiful ceremony was prepared. We were first car out, proud as ever! Once you leave te square where the ceremony is taking place, you are suddenly alone. Off we went for a great adventure. 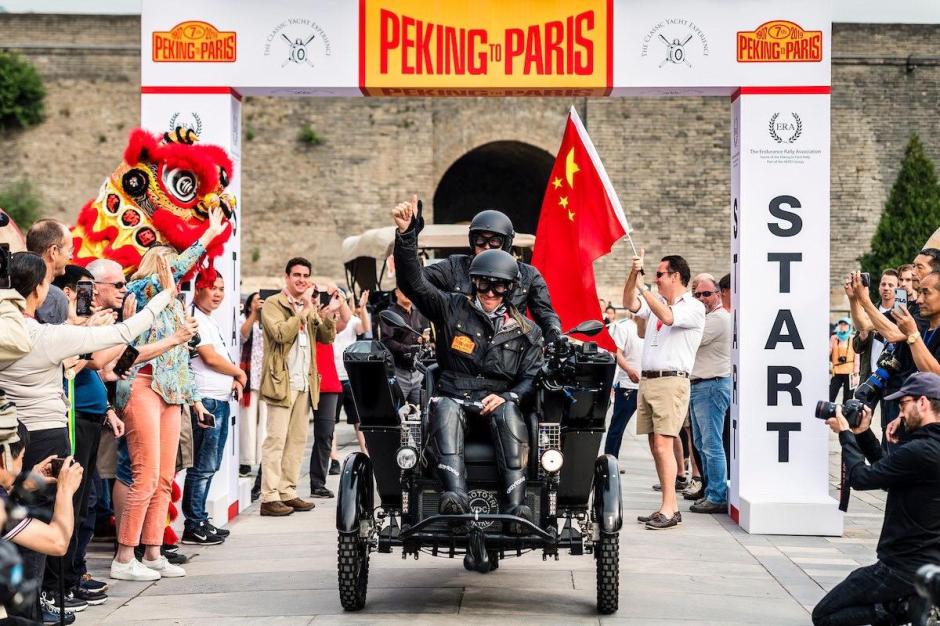 It was a difficult first day in the sense that the driving was very long… 604 kilometers… for the little Contal, thats a long way. Our asses, muscles and backbones were very painful at the arrival at the hotel that evening, but a sense of proudness overmastered the fatigue. The only thing that I remarked on the Contal after the daily inspection is that the two front wheels were a bit different, a bit skew. Anyway…

Next day through China, a beautiful roadbook awaited us. So we left the hotel in high spirit and did our first speed test of the day. Then, on the toll boot to get on the highway… we were refused by the Chinese to go on the highway! Pleading, shouting, crying… nothing helped. They deemed it to dangerous for Herman in the front, we thought, so Herman squeesed in a small competitors car in the back to be picked up by me when they allowed me to go alone on the highway. But bullocks… I was still refused to follow the roadbook. So I had to find a way to get around that highway and back on the roadbook, and I had to find Herman again… Two American guys from the rally brought him to a place we defined on the roadbook and we were off again.

We lost al lot of time so we hurried through a beautiful landscape. at km 150 (there were 400 to do that day), in a petrol station, I saw that the axle was bent on both sides. The wheels stood all the way in. Desaster!

The axle was made to soft. We looked around for a welder, found a little shop in a village nearby, and there a gentle workman started the repairs. He appeared to be an artist. After three hours we were back on the road, a steel pipe welded in the axle and another T-piece underneath. This should hold. The axle was pre-Mongolised. 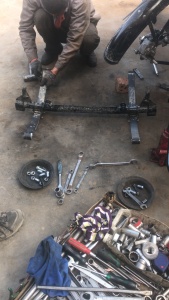 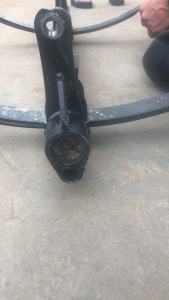 Off we went, happy and sad because of all the lost time. This is not good in a rally, but at least we got the problem fixed. It became dark, we still had 180 km before us when we got stopped again on a toll boot that would not allow us on the highway… So we had to find another way to get across… It was very late when we arrived in the hotel. Shit. The next day was border crossing day to Mongolia so we had to get up at 5:30… It was a short sleep.

The border crossing was ok, a few hours of zen meditation and off we went. But then it was the apocalypse!!! The wind was very hard and we had to make our way to the start through road works as in a desaster movie! Then we had to drive 180 kilometer against a very strong wind to get to the start of the off-road section. Then, the first real test was to be held. The Contal did good, the axle held and we arrived (late) and exausted. the campsite was beautiful, it was a moment of inner happiness to be there. But we were slow… Ow so slow.

The next day was even longer. An off road section of 281 km and then to Ulan Bataar on the tarmac for 126 km. Djeeses. We sat 11 and a half on the thing! Our  bodies are broken. But not the spirit.

So now we have a rest-day. A day to think and to work on the little car. Let’s have a beer too.